It is finally summer and time for some traveling. With the popularity of mobile phones, people create more photos than ever before. Instead of just taking photos of your vacation, use Google Street View app to make 360 images of the places you visit and then add them to Google Maps. Let's crowd source Google Maps for future visitors to your location!

So here a few 360 photos I took with the Google Street View app in the last few days. The first is from Oak Alley Plantation in Vacherie, LA. The second is Lafayette Cemetery #1 in the Garden District of New Orleans, LA. They appear flat because you aren't viewing them from within the app.


You can see in the bottom image that I missed a part of the 360 because the sun was in my eyes! 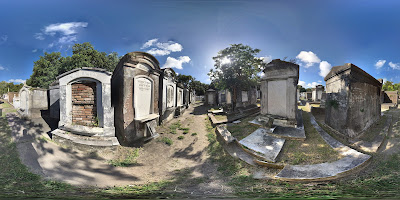 This image is slightly different since instead of using the camera on my phone inside the app, I connected a Theta 360 camera. The fancy 360 camera was not necessary as you can easily see the images taken with my phone worked just as well. (And I felt more comfortable using my phone instead of the Theta because that required leaving the camera  and hiding behind a tomb in order to not be caught in the picture. I was lucky my camera was still there each time I came out of hiding!)

Here is a video to show you how to do this for yourself and with your students: