Real learning is messy. It doesn't happen sitting in desks in rows listening to a teacher lecture about a topic while students take notes then regurgitate the content on a worksheet or test. Real learning means getting your hands dirty while tinkering, creating, and failing. At the end, you may have hot glue burns, broken pieces, and marshmallow squished into the carpet. But the learning that happens in the process is worth all the time, trouble, and tears.

When Susan Barber (@APPhysicsNB) approached me about her end of year PBL that let her students apply Physics concepts in real world applications, I was all in. As part of my Google Innovator Project, I have been trying to change the culture of my school library from a place of just consuming information to a place for new knowledge to be created and built. I was trying to turn my "grocery store" library into a "kitchen" library. This project epitomized the library I wanted to offer to my students.

The project had two parts that culminated in a mash-up. First, students were required to build tiny weapons from the materials of their choice. There were specific size requirements, but the design was up to the students. These weapons would shoot small marshmallows as ammo and would be tested on static and moving targets for accuracy. Secondly, each student group had to code a Sphero SPRK+ using an iPad to navigate the obstacle course. Perimeters were set for the code. As students accomplished each part of the project, they were assessed based on the rubric given to them in the beginning of the project. All of their work came together on the last day as the students sent their Sphero through the obstacle course while being attached by tiny weapons shooting marshmallows. 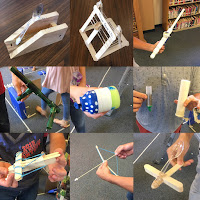 In a previous blog, I mentioned the wide range of weapons that students created. The variety was really not apparent until the day of the battle as many students hid their weapons so others would not copy them. We saw the traditional catapults and trebuchets that we expected. Some students built bow and crossbows, some with trigger mechanisms. Several PVC pipe style guns showed up, some powered by blowing into the device and others with a pump action air component. The simplest, yet effective, design was a portion of pool noodle with a balloon over one end. I was impressed with the designs the students created and how many ways they discovered to solve the problem. 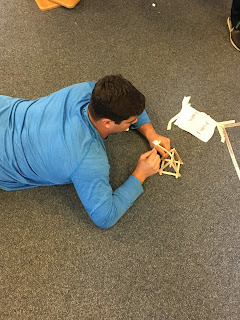 The students enjoyed this project so much and really got into the battle at the end. Seeing huge, burly football players prone on the floor for the best shooting angle was the best reward.

We have already discussed making this an annual project and tweaking it a bit. As you can see from the video below, many students used the edge of the course to avoid obstacles. Expect addition items there next time.

The students also could not resist shooting each others with marshmallows so that may be an added project ending activity. But that battle will have to go outside!